The history of the post-development – Aviation historical archaeology

The beginnings of post-development

Since the research for construction drawings of the Do X airship had been very meagre, only a few overview drawings were found, the decision was made to take the challenge of a reconstruction.

However, this was easier said than done, as the initiator of the project, Peter Kielhorn, had no knowledge of the construction of complex machines, nor did he have the necessary CAD infrastructure. Furthermore, the initiator was not able to finance number of professional CAD designers.

So if a reconstruction of the Do X has to be carried out, but this must cost nothing or very little, then the request was actually hopeless.

But where is a will, there is ultimately a way. And this path led to the Dual Universities in Baden-Württemberg. The cooperation with the universities began in 2014 starting with the DHBW Ravensburg/Friedrichshafen. From 2018, the Cooperative State Universities of Lörrach and Mosbach also participated in the reconstruction of the Do X.

Do X Vision – The procedure for the reconstruction of the airship

As there were no drawings for the reconstruction of the Do X, it was first necessary to work out the constructive basics for the framework of a reconstruction.

In a second stage the preliminary design should be performed for all structural elements of the aircraft with regard to fuselage, wing and tail unit. This phase is 95% completed.

The third and final stage of the Do X reconstruction is the detailed design of the structural components. In this phase the drawings and parts lists for the rebuild of the airship will be developed. This phase is still ongoing.

First results of the detailed design are available, and with this the fourth stage, the rebuild of the Do X, can be started.

In order to model the outer fuselage of the Do X as realistically as possible, a number of different information was put into relation to each other by using a CAD system. These information are original drawings with three-sided views of the Do X, interior views of the airship as well as high-resolution images of fuselage frames and structural components taken within the building phase of the airship. 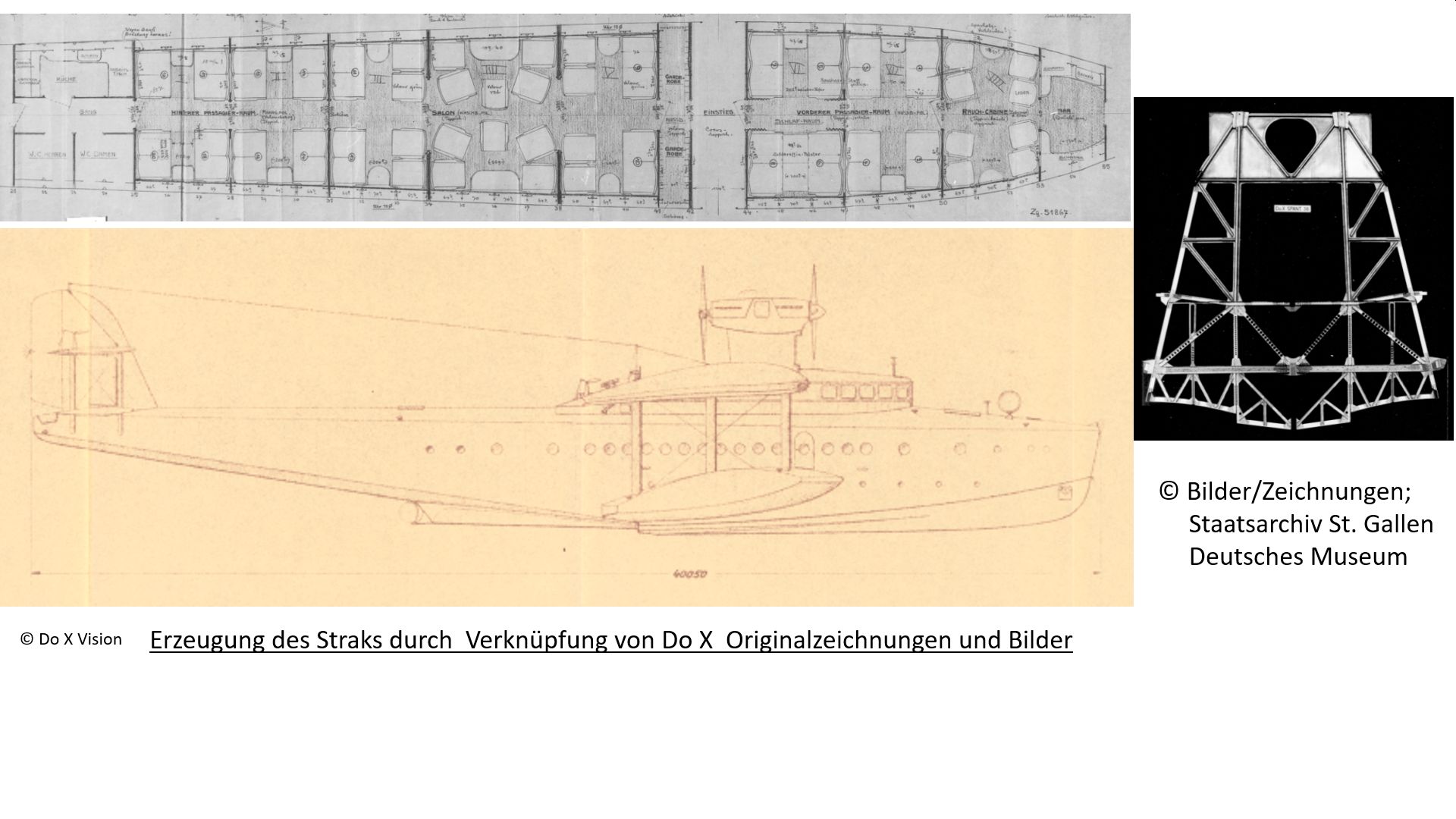 Composition of drawings and pictures

By electronically tracing the contours, the support points of the airship’s fuselage were formed bit by bit. The support points were connected to surfaces elements and thus resulted in the finished fuselage. 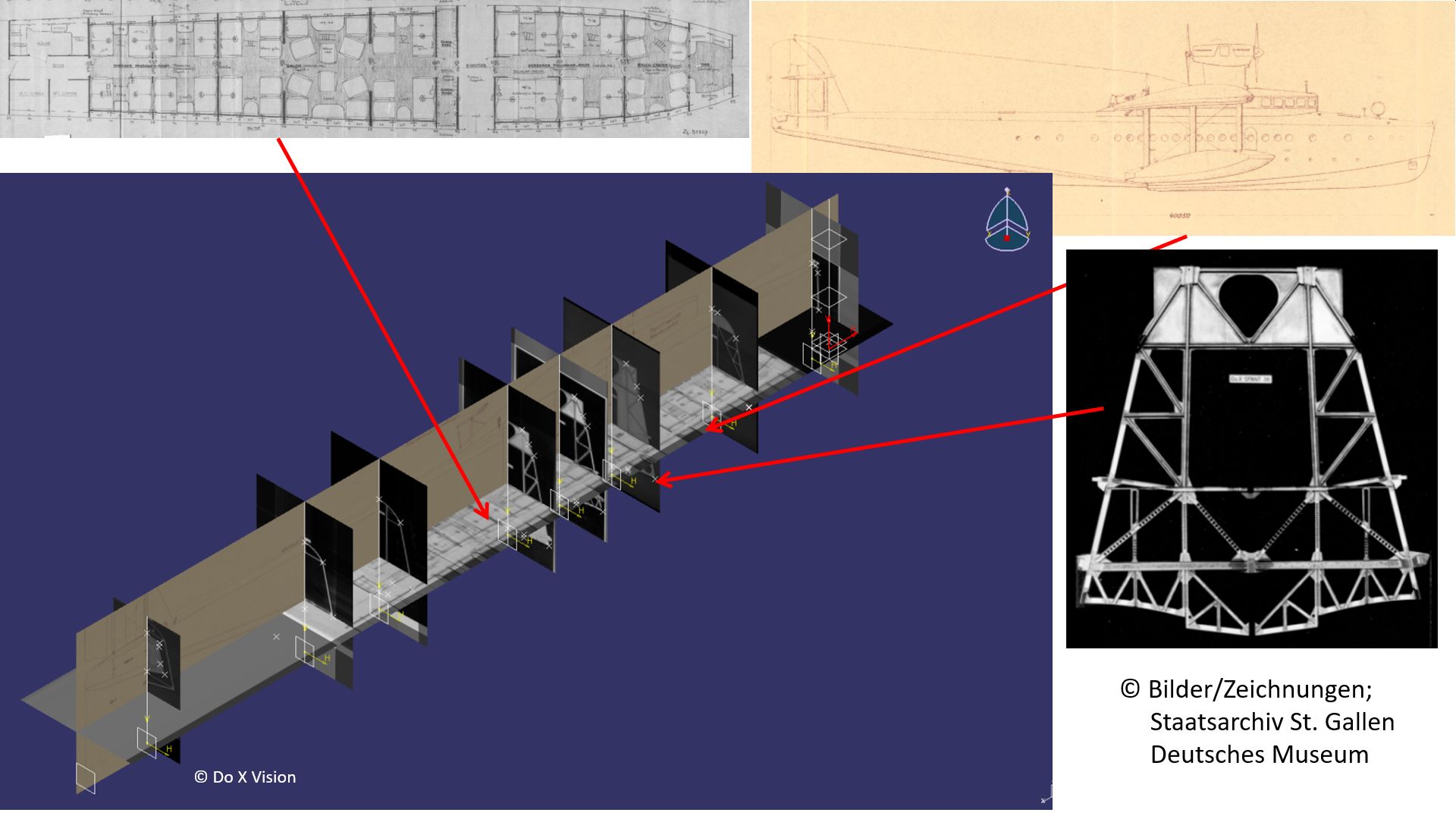 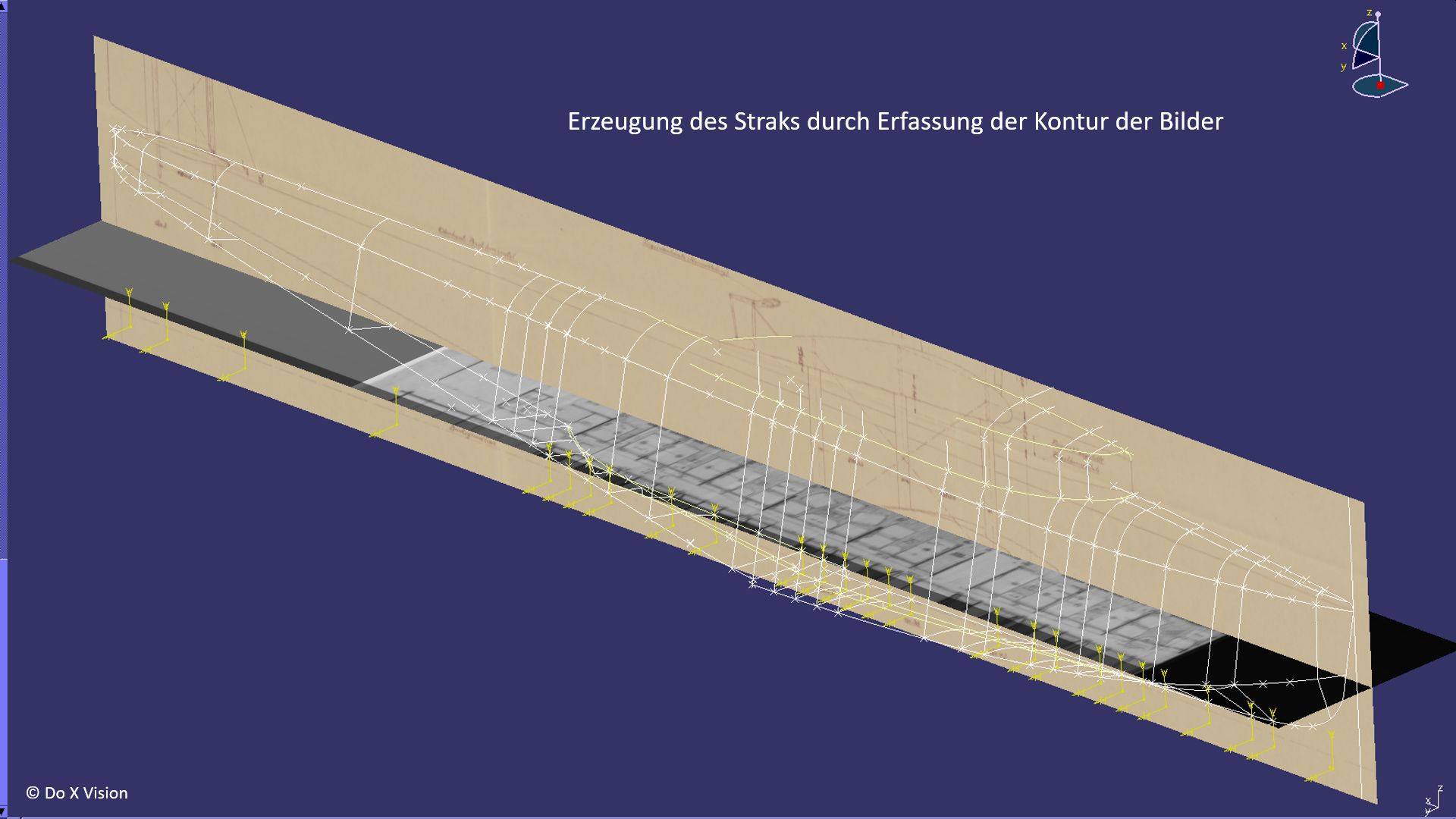 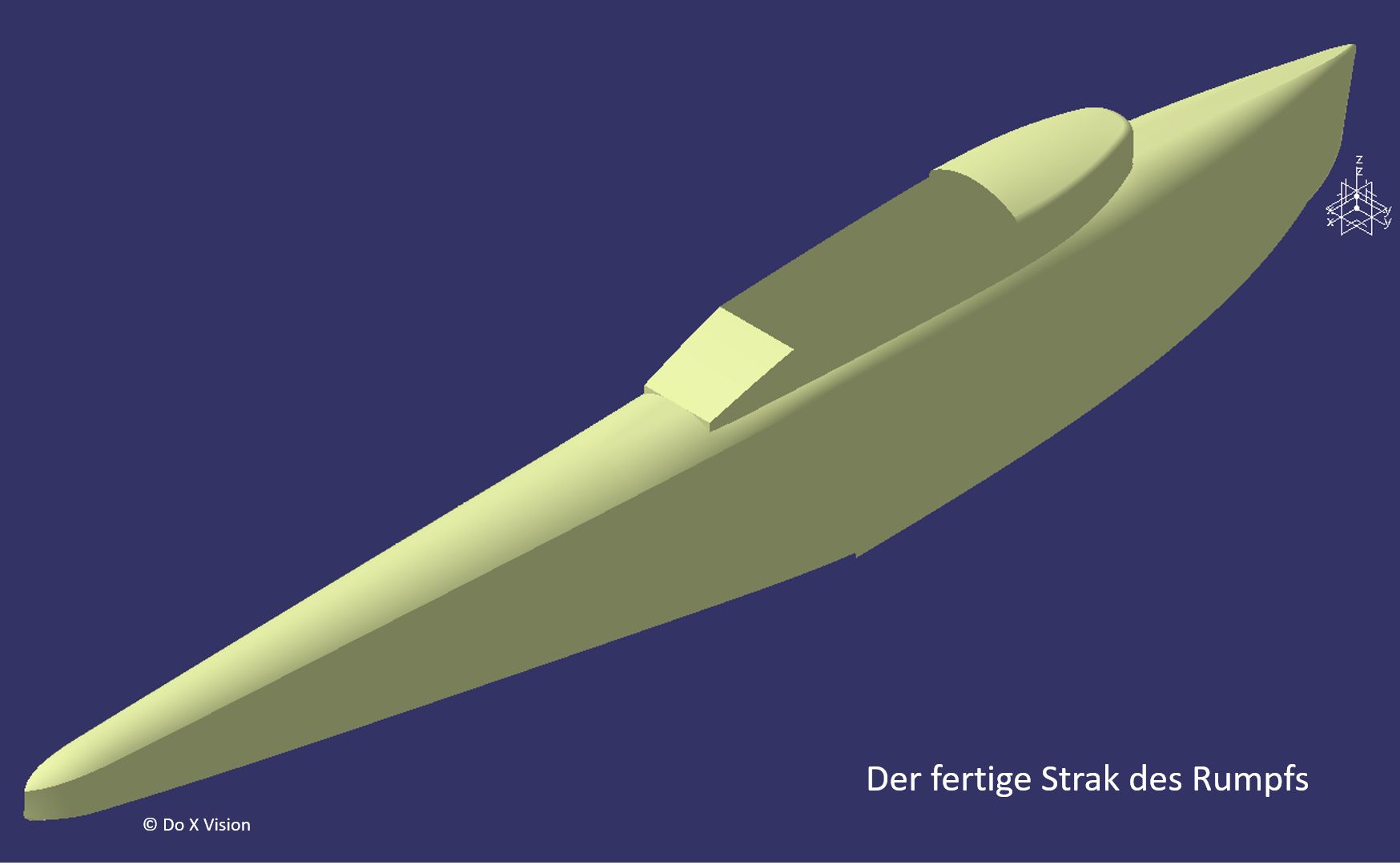 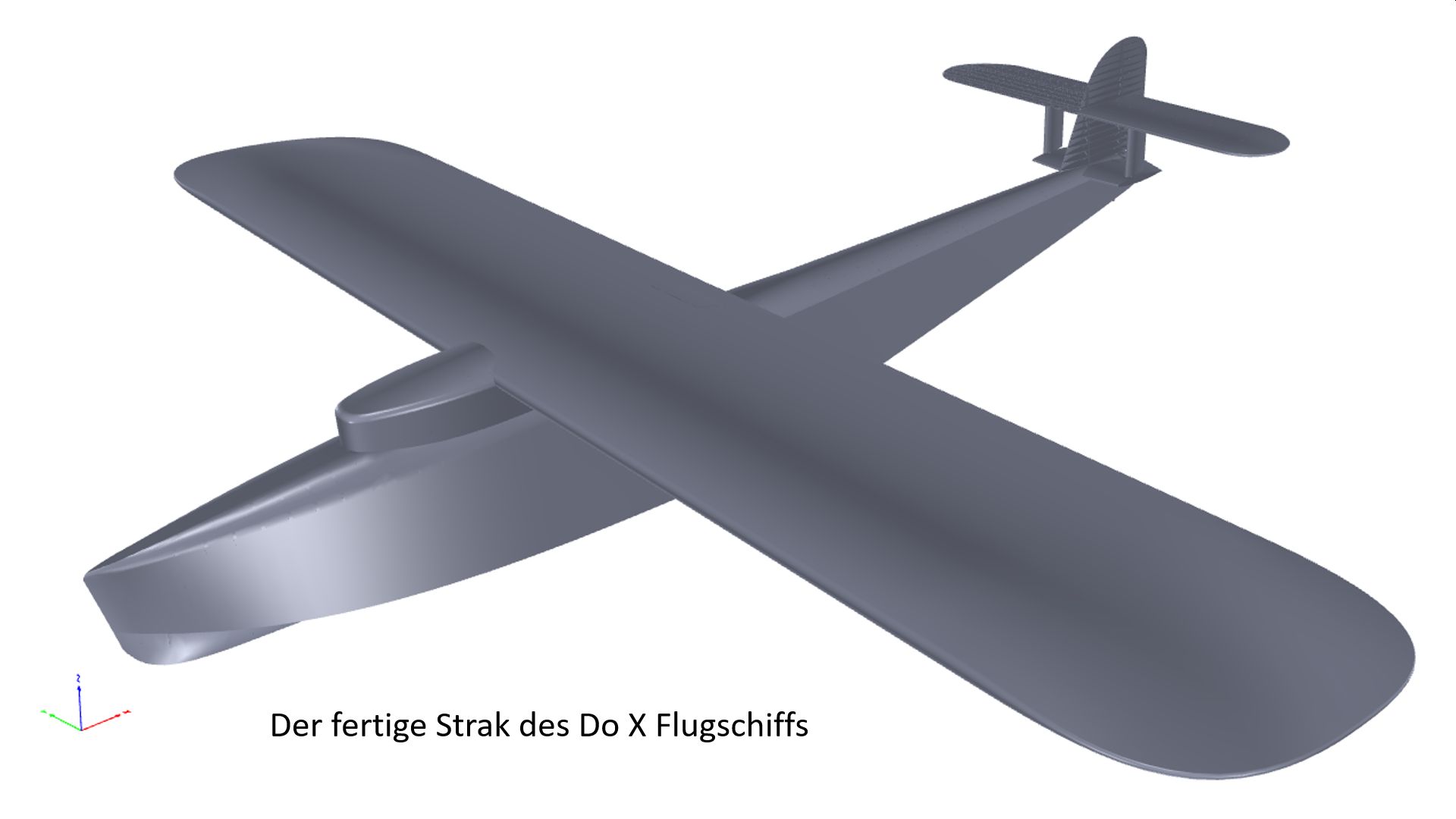 A similar procedure was used for the wing part of the fuselage. However, additional information regarding the wing profile was taken from the corresponding “Göttinger profile” specification.

The phase of the fuselage creation is completed. 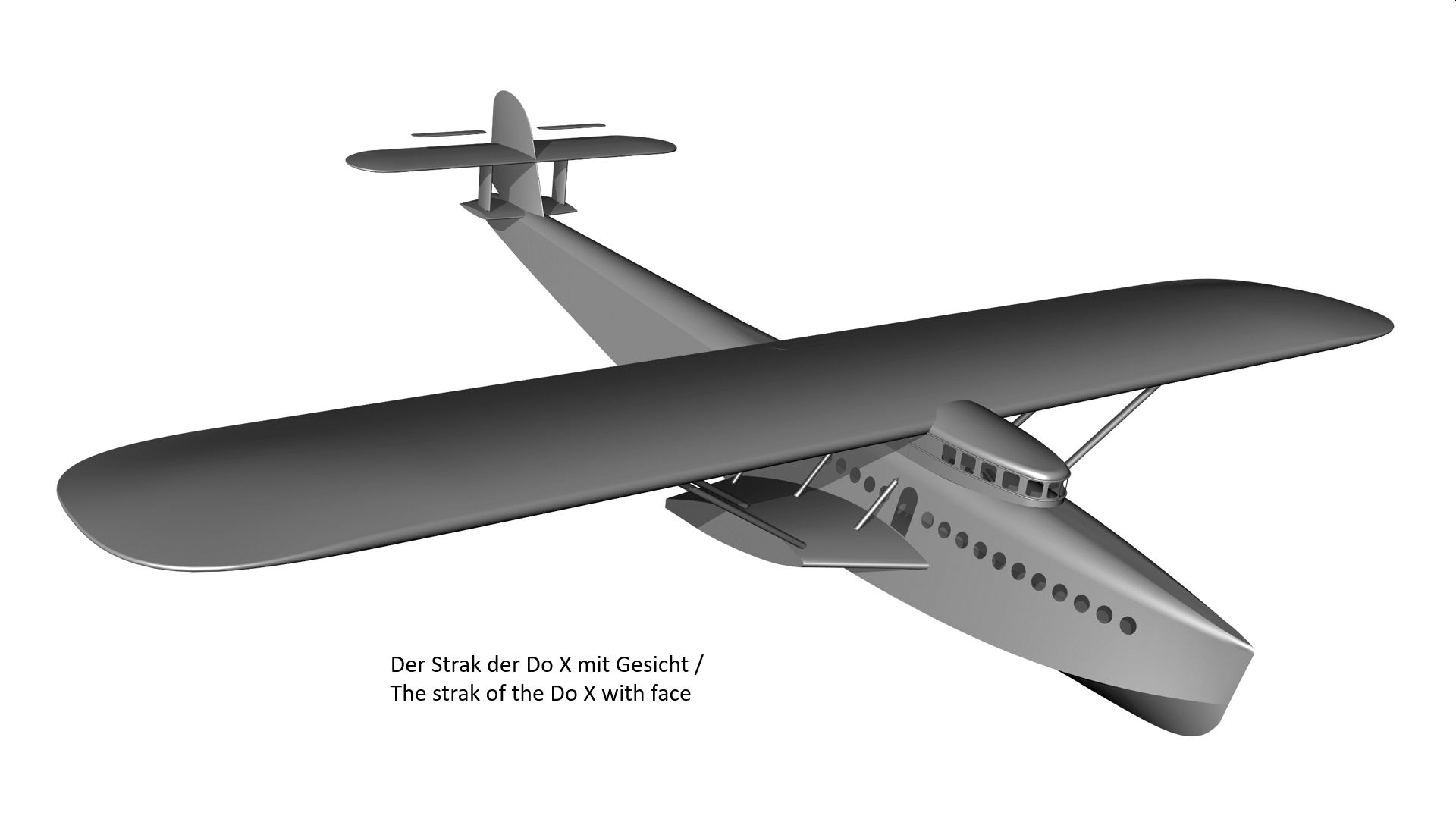 For the preliminary design the generated fuselage and Do X images from the building phase were used. In addition, information about the spacing between the frames and important dimensions of the wing and tail unit are considered.

preliminary design means to develop all structural components of the Do X as rough construction elements. This means that the components are realized as rough square profiles. Refinement into the final A-, L- and U-profiles was not required at this stage. However, the ribs, spars and beams had to be approximately correct from the structure and fuselage contour, i.e. the outer bevel of the rib has to follow the contour of the fuselage.

Principle of the preliminary design

Result of the preliminary design I

Result of the preliminary design II

As part of the preliminary design, the propellers, the engine nacelles and the Curtiss Conquer engine were also constructed. These design elements are already quite detailed and could therefore actually belong to the detail design phase.

The propeller outline was recorded by laser scanner in a reverse engineering work. The Fliegermuseum Altenrhein was kind enough to provide an original Do X propeller for the laser scan.

Laser scanning of a Do X propeller

The captured pixel data was further processed and converted into the required CAD data format. 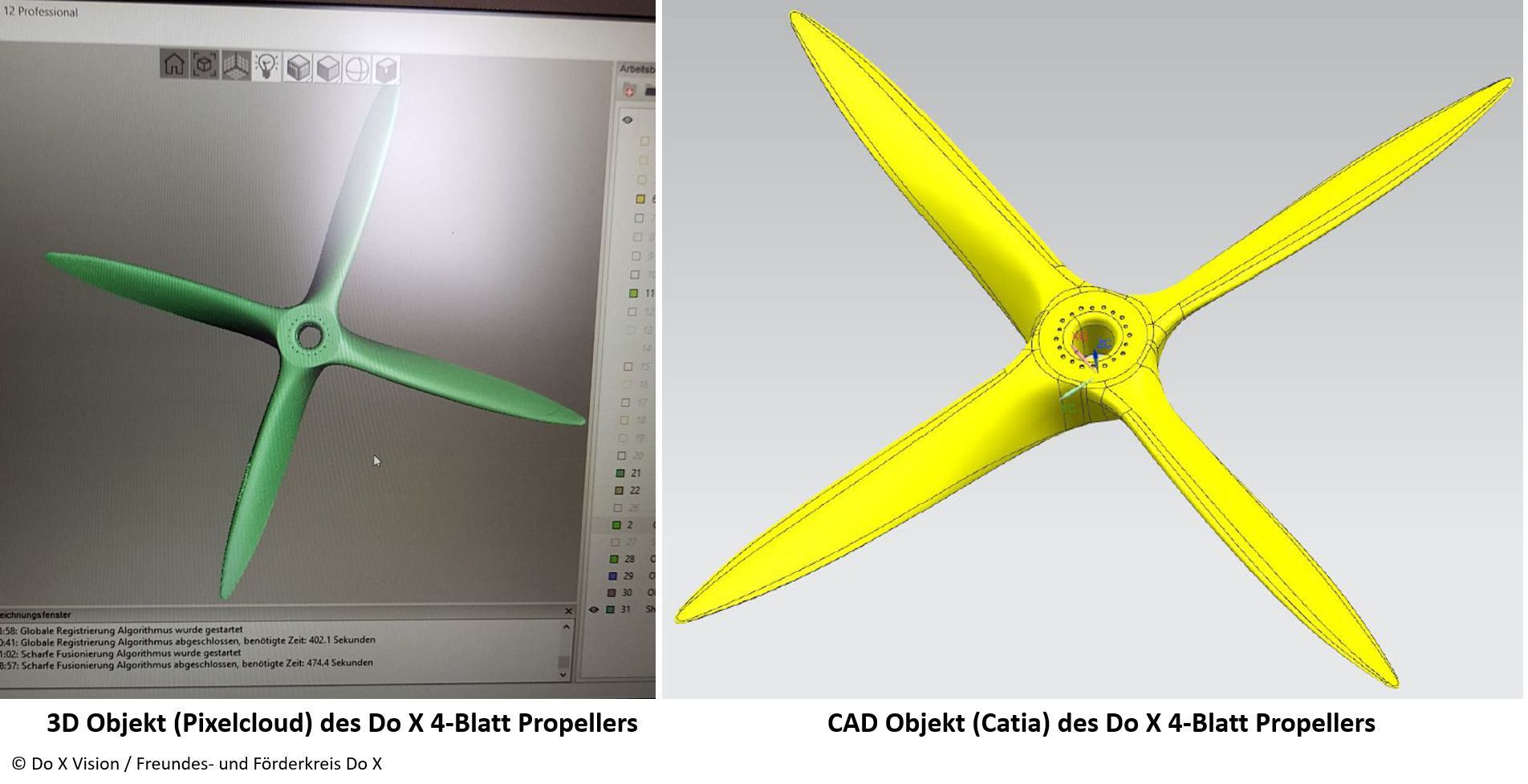 The Curtiss engine was designed on the basis of the relevant engine manual. We thank the Wright State University, Dayton, USA for providing the engine manual. 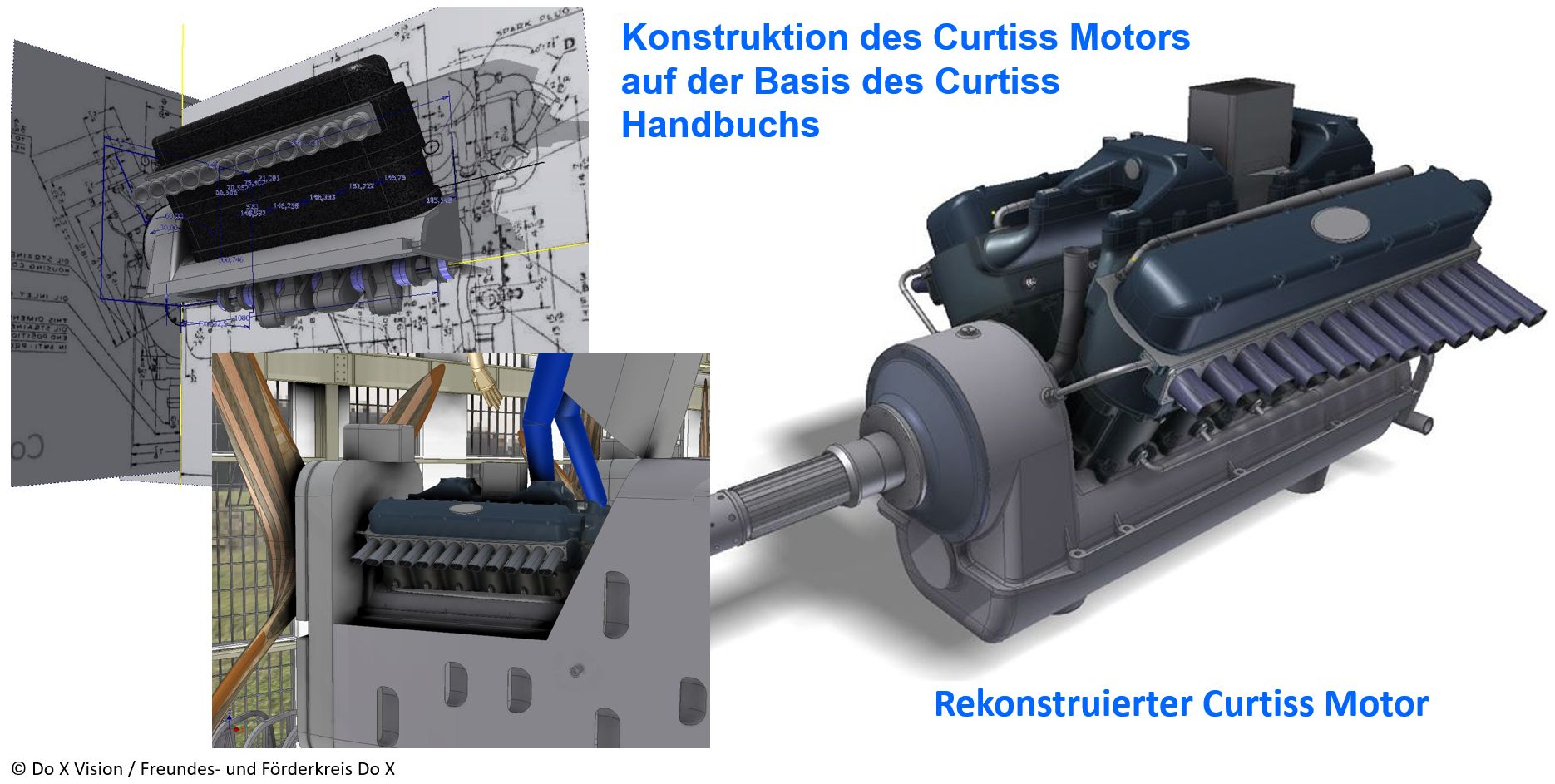 Designed engine system of the Do X I

Designed engine system of the Do X II 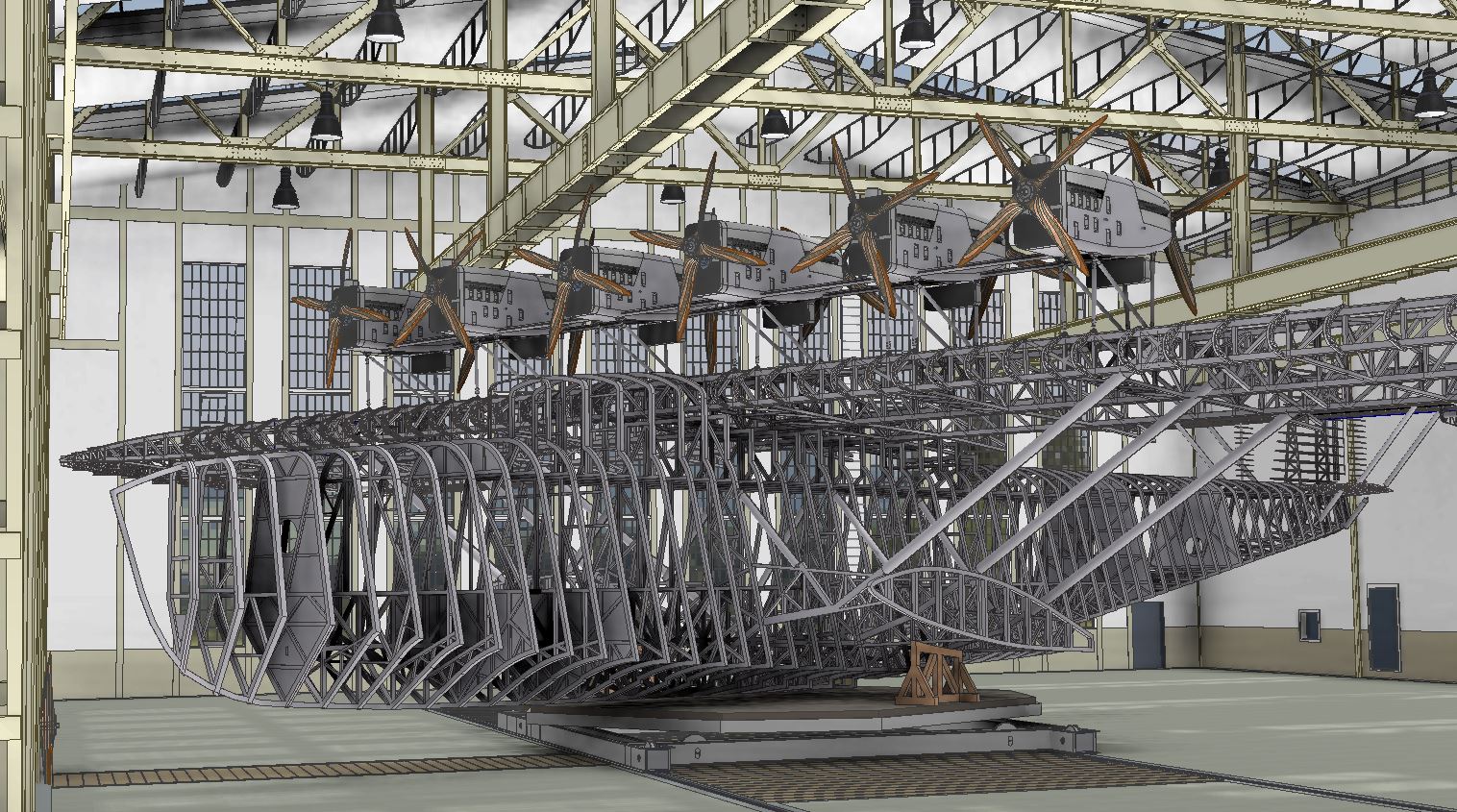 Preliminary design of the Do X in the Dornier Hangar Altenrhein

In the third stage of the design, the final plans and parts lists were and are being drawn up, which will enable the Do X to become reality again.

The basis for the detailed design is the preliminary design and the picture of the corresponding component. A Dornier profile book, in which all usable profiles are given with dimensions, served as an additional basis for the detailed design. For some elements, e.g. currently for the central fuselage support structure or in future for the wing structure, standard profiles were used, which are available from specialist dealers.

Principle of the detailed design

In order to ensure that the transition from the preliminary-design, where the components are laid out rather roughly, to the detailed design, where the final lightweight profiles are used, the essential dimensions had to be adhered to. Decisive were:

In August 2020 24 fuselage ribs have been designed in detail. This means that for more than 75 years there are detailed plans existing for the rebuild of the Do X. 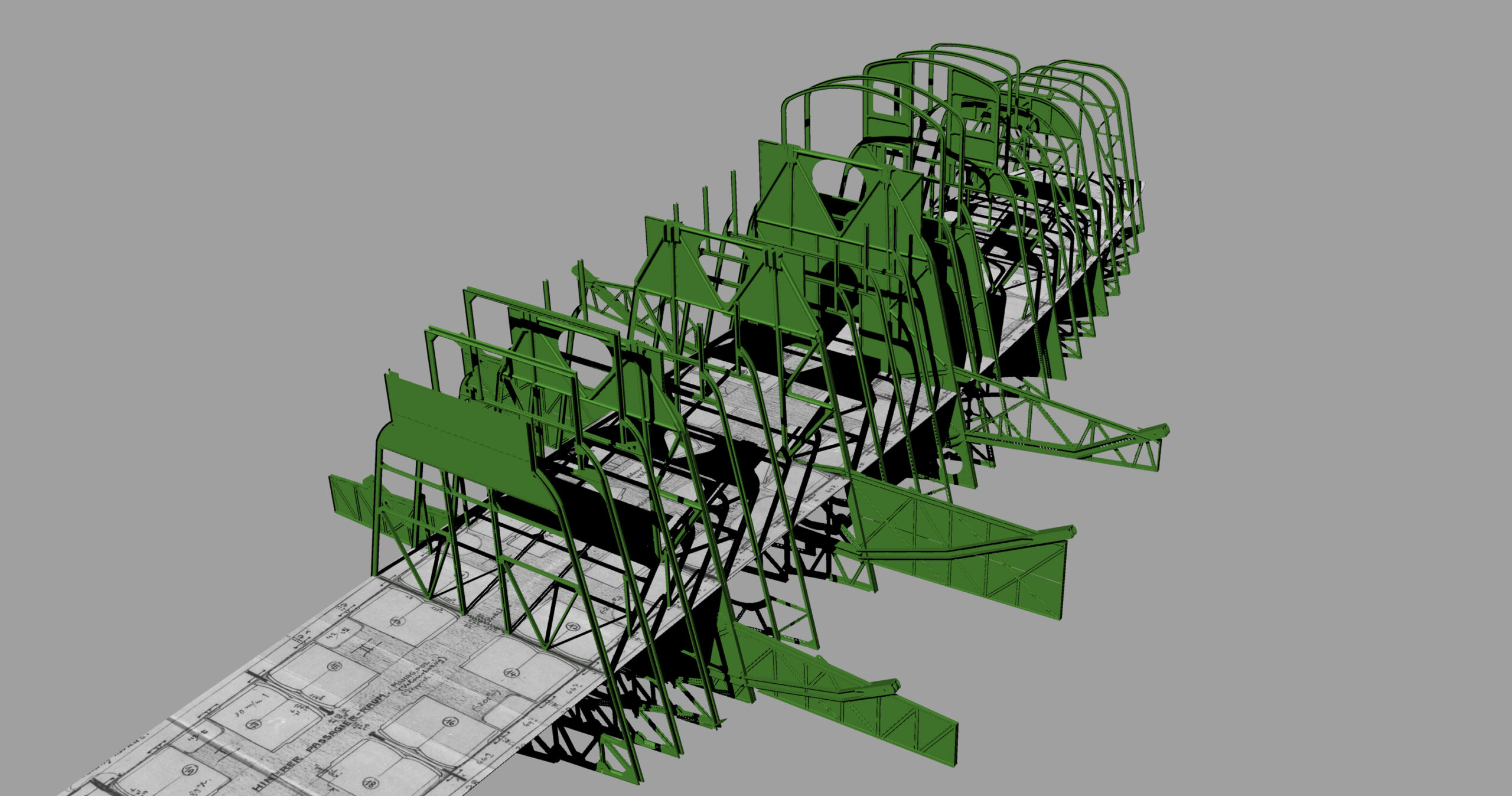 The forward section of the Do X is ready for building

The rebuild, beginning with forward section of the aircraft, can begin!

In August 2021 54 fuselage ribs and the central fuselage support structure have been designed in detail. This means that the nearly the complete fuselage of the airship is ready for the rebuild.

Support us to bring the Do X back to reality! 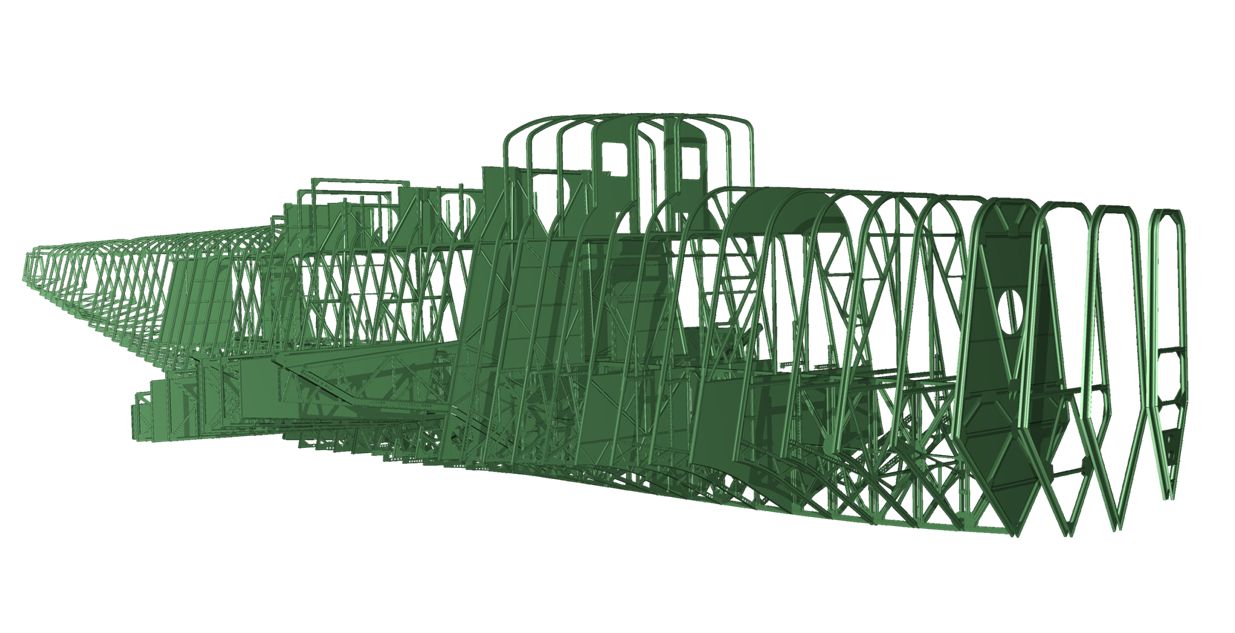